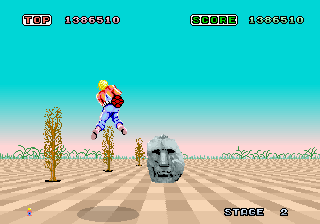 Space Harrier (スペースハリアー Supēsu Hariā) is a third-person rail shooter game, released by Sega in 1985. It was produced by Yu Suzuki, responsible for many popular Sega games. It spawned several sequels: Space Harrier 3-D (1988), Space Harrier II (1988), and the spin-off Planet Harriers (2000). Space Harrier was originally made for the arcades, and later saw ports to many home game systems. Space Harrier's release on the Sega Master System is notable, as there were two versions: one was just like the arcade, while the other, entitled Space Harrier 3-D was actually a sequel. It was one of the first arcade games to use 16-bit graphics and Sega's "Super Scaler" technology that allowed pseudo-3D sprite-scaling at high frame rates, with the ability to scale as many as 32,000 sprites and fill a moving landscape with them, along with over 32,000 colours displayed simultaneously on the screen. It also introduced a true analog flight stick for movement, with the ability to register movement in any direction as well as measure the degree of push, which could move the player character at different speeds depending on how far the stick is pushed in a certain direction. The game was also an early example of a third-person shooter; it was influenced by the earlier 1982 Sega game Buck Rogers: Planet of Zoom, and Space Harrier in turn influenced later 3D shooters such as Nintendo's Star Fox/Starwing in 1993. Space Harrier is set in the "Fantasy Zone", a surreal world composed of bright colors and a checkerboard-styled ground. The enemies are also unique, featuring prehistoric animals, Chinese dragons, and alien pods. The player is forced along the levels, running or flying around enemy fire, while shooting back with fireballs via the character's under-arm cannon (which doubles as a rocket-esque device allowing the character to fly). The character graphics are sprite-based, though the level backgrounds are pseudo-3D. The arcade version of Space Harrier used digitized voices. When starting the first level, for example, the player would be greeted with "Welcome to the fantasy zone; Get ready". After defeating a boss, the player was assured that "You're doing great". Like After Burner, Space Harrier was among the first (perhaps the very first) arcade game to feature a console in which the player sits, and which moves according to the joystick movement. There is also a non-moving sit-down version and a standard upright version. The arcade version has a total of 18 levels, each containing a boss at the end. Three exceptions are the bonus levels (5th and 12th), and the 18th level, which is a boss rush containing some of the bosses encountered up to that point. The 3-D Battles of World Runner by Square bears a strong resemblance to the game. Computer Gaming World in 1988 called Space Harrier "the best arcade shoot-'em-up of the year ... as exciting a game as this reviewer has ever played". The game was runner-up in the category of Game of the Year at the Golden Joystick Awards.

Run… fly… dodge those obstacles, but return fire on wave after wave of attacking aliens. Armed with a really big gun, you have to defend yourself against the alien hordes using your wits to navigate around the screen. But watch out for those end of level bosses!

Originating in the arcades, Space Harrier is a third-person rail shooter with pseudo-3D graphics, set in the same world as Fantasy Zone. The lone titular hero fights aliens with a fireball-launching cannon, which can also be used to transform the hero into a flying rocket. The protagonist is constantly in motion, but the speed of his movement can be regulated by the player.

Beyond this, it is incredibly important from a historical perspective; in 1985, the technology of this absolutely blew everything away.
When this game was released, people were used to their Atari 2600's; the NES was not yet a household regular. Space Harrier brought dual 68000's along with Sega's "Super Scaler Graphics", supposedly designed by NASA, to allow sprite scaling to an effect never seen before in the consumer market.
To get an idea of just how far ahead the graphics were at the time, load up any other game from 1985 in the archive; then load up any Atari 2600 game; then compare them to Space Harrier arcade.

Beyond this, it took the rest of the industry quite some time to catch up.
In the arcades, only Sega was able to match, and then ultimately go beyond SH's graphics with its own evolving hardware; I peg it at Virtua Fighters 1 in 1993, when an arcade game finally looked significantly "better" than 1985's SH.

On the consumer front, it took even longer.
There were tons of ports. The Sega Master System had an (obviously) inferior port in 1986; every computer system at the time had one as well.
The Sega Genesis had a far inferior (with no sprite scaling) "Space Harrier II" in 1989.

To give further perspective, the 32X, a $159 add-on for the Sega Genesis, was released in 1994. One of its best sellers was a port of SH; this was ALMOST arcade perfect, but STILL couldn't quite keep up with the frame rate and resolution of its 1985 grandfather.

It literally took until 1995 (in the US) for the Saturn/Playstation release for the console market to catch up (and exceed) the graphical prowess of this 1985 gem.

Additionally, this is the precursor to the true 3rd person (or even 1st person) shooter. I would argue that it is the ancestor to just about any 3D action game played today.
It is still, to this day, being released in some form or another, most recently for the Nintendo 3DS in actual "3D", including a final boss battle added on from the Sega Master System.
If you are unfamiliar with this work, you absolutely must try it; while playing it in a web browser (or even a TV) takes away some of the magic of playing it in its original sit-down cabinet with flight stick, you can still get a sense of the revolution this title brought in 1985 and beyond.